The proposed steering parachute system to be developed in the PARAPLANE project will have, among others, the following advantages :

-   Manual and automatic steering capabilities, enabling the aircraft to land in pre-defined landing zones (by modifying the canopy shape in specific areas through controlled suspension lines).

-   Low size and light weight (which is always an important target in the aeronautical sector).

-   Soft landing (by efficiently pulling the suspension lines in order to decrease the horizontal and vertical components of the velocity at touchdown).

-   Capability to select a landing area from an internal database of tentative landing areas (depending on altitude, distance, glides, etc). This capability will increase possibility of survival, both for the crew and the airplane. The quality of the selected landing area will take into consideration criteria such as flatness of the terrain, or proximity to a road /sea/housing area, etc. 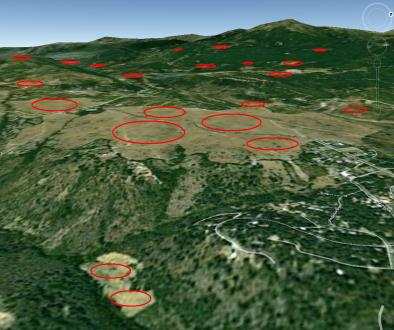 The main components of the steering parachute system that will be analyzed and improved in the PARAPLANE project are :

-   (1) The extraction device : Consisting of a solid propellant rocket or other similar system (like a mortar system), a mechanical spring based system and a pneumatic system. It will also be optimized to minimize the time needed to extract the parachute

-   (2) The steerable parachute system : as in round parachutes, it will be made of textile fabrics, webbing and threads. The canopy will be of the rectangular ram-air type, and will be composed of different panels sewn together and connected to the suspension lines and risers. The shape of the parachute will create aerodynamic drag and lift forces, giving both deceleration and flight capabilities to the aircraft during the descent phase. A reefing slider device will be designed to reduce the high loads on the parachute canopy during the inflation phase, since the usual devices used to reduce the opening shock, such as standard rings or reefing caps are not be appropriate in the proposed equipment due to the new opening requirements of the system.

-   (3) The emergency activation system : a secure and robust activation system based on the generation of an electrical signal will trigger the rescue sequence. The need to avoid unexpected and undesired activation will be taken into consideration in the design.

-   (4) The Autonomous Guiding Unit : A modular light weight, low volume and low energy consuming steering system will be designed. This unit will have the ability to identify the position and speed of the aircraft, based on GPS and accelerometers information. The system will define the trajectory to the target, the identified safe landing area, and will interact with the control unit to follow this trajectory and guide the parachute to a pre-defined target with an accuracy of 100 m or less.

-   (5) The Flight Control Software : it will be capable to identify pre-defined drop zones and to autonomously fly the parachute system to the landing target area, taking into consideration wind influence and flight aerodynamics.

-   (6) The Landing area identification software : devoted to the improvement of the safety of the crew and the plane in such a situation, the landing software will acquire data from a database to select the most appropriate landing area.

All components to be produced during the PARAPLANE project will be designed keeping always in mind that the future implementation and introduction in the market of the proposed safety system implies the fulfillment of the certification requirement s . Therefore, design parameters will be chosen according to regulatory compliances and specifications .

The consortium of PARAPLANE has succesfully held a follow-up meeting in Kamenz, Germany.Flight Design hosted the WP1 meeting at mid February. Technical discussion was held along the two days of the meeting.


Kick-off Meeting of the PARAPLANE project

On December 4th 2012, the PARAPLANe project was successfully launched.The celebration of the Kick-off meeting in Granollers, Spain, meant the launch of the activities of the project.