The spin-off of CIMNE, Buildair, has built the hangar H75, an inflatable structure made of PVC coated fiber cloth, which is anchored to the ground and is continuously fed by inflation engines. With 75 meters of interior light size and 33 meters of height, Buildair H75 beats the world record of inflatable hangars for aircraft maintenance, held to date by the Buildair H54, 54 meters in light size, which is located in the facilities of Airbus in Getafe (Madrid, Spain). 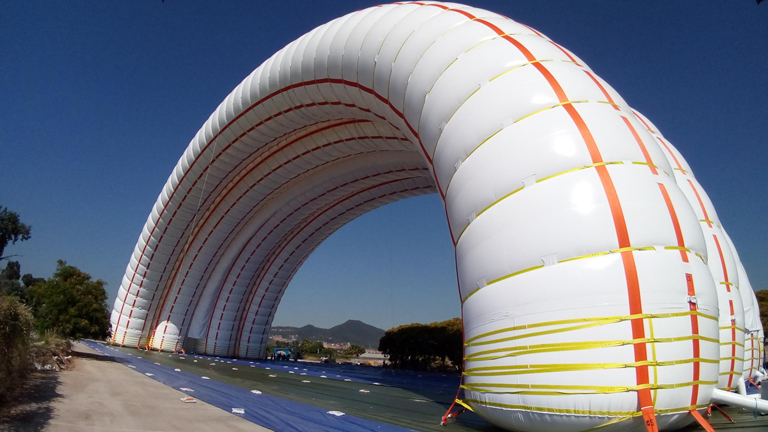 The Buildair H75, which has tubes of 8 meters in diameter, is designed and built following the code in charge of regulating this type of structures (UNE-EN 13782:2016) and the Eurocode that controls the resistance of the wind load. The hangar supports wind gusts of up to 120km/h, resistance equivalent to that of a traditional fixed building. In addition, the dimensions of the H75 allow to accommodate wide body aircraft such as the Airbus A330 or the Boeing B777, as well as any aircraft of equal or smaller size.

Among the advantages of the use of inflatable structures for the maintenance of aircraft highlights the shortening of delivery times, ranging from one to six months, or the absence of request permits. Considered equipment and not buildings, these structures can be installed without requiring construction permits, so that procedures are streamlined. They are completely removable and transportable in standard containers, do not cause structural damage when installed and require a very low level of investment being compared with traditional fixed installations.