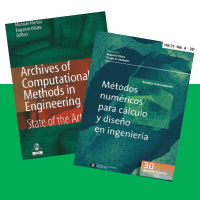 Clarivate Analytics has just released the Journal Citation Reports (JCR) 2018® with the latest information about impact factors (IF) in academic journals. The JCR 2018 edition shows an increase in the two CIMNE journals: Archives of Computational Methods in Engineering (ACME) with an IF =7.242 and Revista Internacional de Métodos Numéricos para Cálculo y Diseño en Ingeniería (RIMNI) with an IF= 0.371.

Since 1994, Archives of Computational Methods in Engineering (ACME) has been providing an active forum for the dissemination of results in both research and advanced practice in computational engineering, with particular emphasis on mechanics and its related areas. A unique feature of this journal is that it exclusively publishes extended state-of-the-art reviews in selected areas. ACME is published by Springer.

The Revista Internacional de Métodos Numéricos para Cálculo y Diseño en Ingeniería (RIMNI) was founded in 1985 at the Technical University of Catalunya (UPC) and is managed by CIMNE. Since 2016, RIMNI has been published in open access in Scipedia. The journal publishes articles written in Spanish, Portuguese and English with a focus on theoretical advances and practical applications of numerical methods in engineering and other applied sciences.