The 14th World Congress in Computational Mechanics & ECCOMAS Congress took from January 11th to 15th, 2021. The Opening Session was introduced by the presidents of both scientific societies organizers of the event, Prof. Antonio Huerta (IACM) and Michał Kleiber (ECCOMAS), followed by Prof. Francisco Chinesta's speech, Chair of the Conference. During the Opening Session, ECCOMAS and IACM prizes were awarded.

In this edition, ‪Prof. John Dolbow was in charge of presenting IACM awards. CIMNE scientists Prof. Marino Arroyo and Prof. Irene Arias were awarded the IACM Fellow Award, a prize that recognizes up to 8 individuals with a distinguished record of research accomplishment and publication in areas of computational mechanics, and demonstrated support of the IACM through membership and participation in the Association, its meetings and activities.

Prof. Xavier Oliver received the Gauss-Newton Medal, the highest award given by IACM. It honors individuals who have made outstanding, sustained contributions in the field of computational mechanics over periods representing substantial portions of their professional careers.

Michał Kleiber, President of ECCOMAS, was in charge of the ECCOMAS award ceremony and presented the award to Prof. Eugenio Oñate, Director of CIMNE, awarded with the ECCOMAS Ritz-Galerkin Medal 2020, the highest award given by ECCOMAS, honoring individuals who have made outstanding, sustained contributions in the field of computational methods in applied sciences over periods representing substantial portions of their professional career. 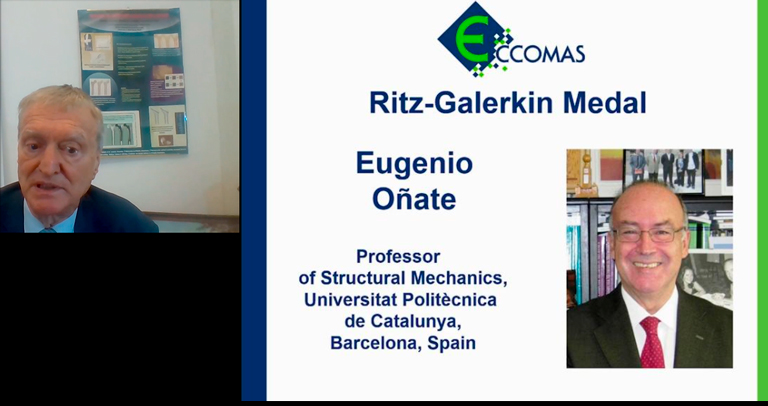 The WWCM Congress in Computational Mechanics & ECCOMAS Congress had to be rescheduled and celebrated virtually for the first time in its history, due to the COVID-19 crisis. However, the edition has gathered more than 3000 participants from 30 countries and its organizers make a positive balance: "Nearly 150 sessions were held! Together with the 2500 questions and comments posted on the different talks, they have been the source of rich and inspiring scientific debates". More than 280 symposia have been celebrated during this edition which counted with more than 2500 contributors.