CIMNE has been awarded one of the “Knowledge Industry grants for 2018. Modality B. Product Grants” by the Agency for Management of University and Research Grants (AGAUR).

CIMNE has obtained one of the grants among the 26 proposals for funding, from 147 submitted. The awarded CIMNE proposal is entitled “Validation of inflatable breakwaters design for the intelligent protection of sandy beaches against erosion”. The Scientific Responsible for the awarded project is Professor Eugenio Oñate and the Entrepreneur Scientific is Pere-Andreu Ubach.

Most of the European margin of the Mediterranean shoreline suffers a generalized problem of beach erosion and loss of land. This problem also occurs in other maritime basins of the European continent. Indeed, the problem is well documented in various research studies funded by the European Commission, such as Eurosion. The problem arises as a combination of causes all having effect on the coast. The loss of sediments happens as the consequence of a disequilibrium between the sediments that arrive to the shoreline from inland and the coastal transport caused by the incident waves. On the one hand, there is a reduction of sediments arriving from inland because of the construction of river dams and the intense urbanization of the coastal areas.

And on the other hand there is a change in the dynamics of coastal transport caused by the construction of harbors, but also because of the effects of climate change. The development and construction of inflatable breakwaters promises not only to dampen the effects of climate change on the coastal dynamics of sediment transportation, but to entirely control those dynamics. Breakwaters parallel to the shoreline have proven extremely effective at protecting the shoreline against the effects of severe storms. But experience also shows that they have negative side-effects such as lack of water renewal or excessive and uncontrolled beach growth. Inflatable breakwaters solve these problems by erecting the breakwaters only when needed and thus preventing the side-effects caused by the very existence of the breakwater when it is not needed. 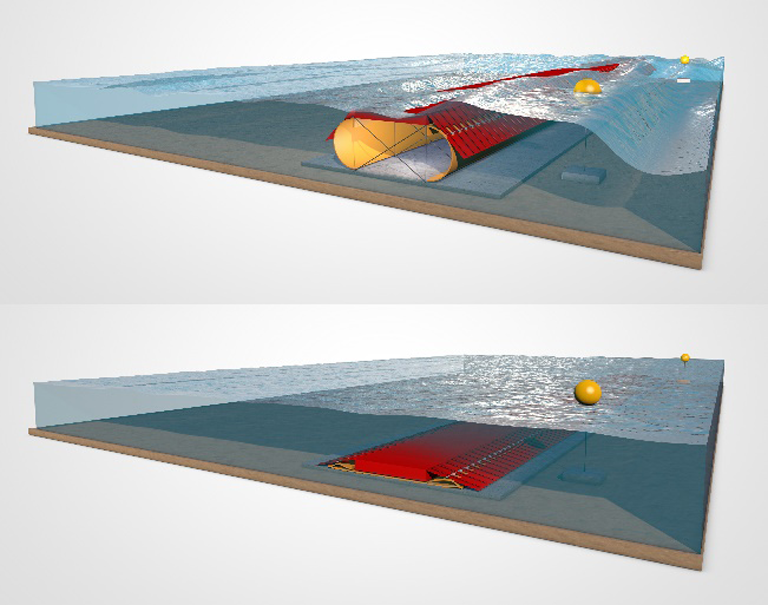 Different government bodies have shown interest in this technology. The Ministry of Territory and Sustainability by the Government of Catalonia, the Demarcation of Coasts of Barcelona and Tarragona, the Ministry of Environment of Spain, and the cities of Sitges and Deltebre have expressed their interest in exploring this technology. The industrial capabilities needed to apply this technology are well within the reach of the industrial environment of Catalonia (construction, steel and concrete production, pumping machinery, etc.) and taking advantage of top world producers of some specialized materials based in Europe, such as neoprene fabrics (Italy, France) fiberglass reinforced trusses and decks (The Netherlands, Sweden, Italy), and advanced composite fibers (Spain, Germany).

The purpose of the project is to conduct a validation test with a test specimen in a wave tank to receive the endorsement of the authorities.