The Deltebre City Council, in partnership with the International Centre for Numerical Methods in Engineering (CIMNE), has presented the European project HAMELIN. It consists of technological research funded by the European Commission to control the the mosquito pest and reduce the impact of pesticides on the ecosystem of the Ebro Delta.

On July 16th, 2020, the Kick of Meeting of the project took place in Deltebre to present a pilot test scheduled to run until February 2022. This action, according to the mayor of Deltebre, Lluís Soler, "starts a research project that can become a turning point to generate new methods of control of the plagues with the aim of reducing the the mosquito to the minimum, and it could also be applied on the apple snail or the blue crab".

Soler thanked CIMNE for choosing Deltebre as the venue for the pilot test of the project and highlighted that this fact "is another example of the projection and the capital status of the municipality". 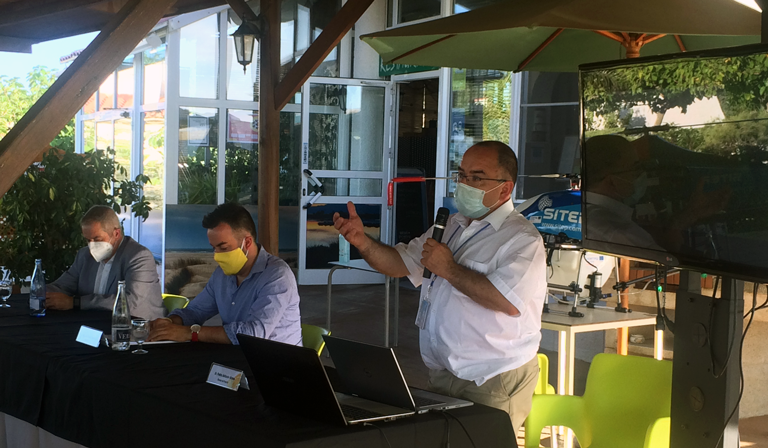 Pedro Arnau, Principal Investigator of HAMELIN, during his speech

This innovation system will be carried out through three tools. A climate analysis, through a platform that will collect environmental information; capture and collection of information, through a two-way system that will allow the public to send the geolocation of mosquito larvae and the action of drones. Acting with drones will make insect treatment more effective, surgically, while reducing the indiscriminate spread of pesticides.

The care and maintenance of the ecosystem to continue enjoying the special environment of the Delta has been one of the points highlighted by Principal Investigator of Hamelin Project, Pedro Arnau del Amo, throughout the explanation given by the director in front of the entities representing the tourism sector. Another participant of the meeting was the Government Delegate in Terres de l'Ebre, Xavier Pallarès, who highlighted that "today is the first stone of a leading project that we hope will be successful and that will help the municipality of Deltebre, like other municipalities, to reduce the impact of mosquitoes and other pests”.

It should be remembered that Deltebre delegated the powers of the mosquito to COPATE, the Consortium of Environmental Policies of Terres de l’Ebre, and it is the consortium that carries out the treatments for the control of the mosquito pest in Deltebre.

Photo group at the end of the presentation of the project

This action becomes a public-private collaboration in which the participants International Centre for Numerical Methods in Engineering, the Technical University of Catalonia, the University of Perpignan and private companies that also participate in the project, and it also has explicit support of the Department of Territory and Sustainability of the Government of Catalonia. In any case, it can be carried out complemented by private contributions, but also thanks to funding obtained through the FEDER (European Regional Development Fund) and the POCTEFA (Interregional Program V-A Spain-France-Andorra). The total cost of the project is 864,000€.