Josep Monràs, president of the RIVUS Foundation, Braulio Moreno, president of the Giswater Association, and Ernest Bladé, director of the Flumen Institute, in representation of the CIMNE, have signed at the headquarters of the Foundation. The agreement will allow the joint study and development between the CIMNE, the RIVUS Foundation and the Giswater Association of a simulation model to evaluate the effects of a rain episode in an integrated way. 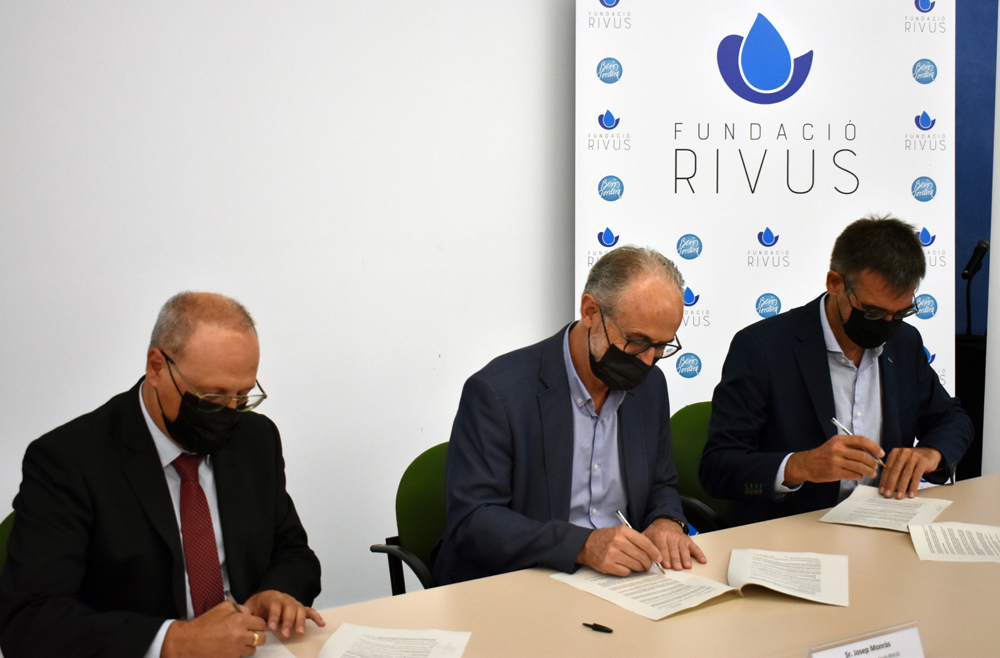 Josep Monràs explained that “it is a local project, one of proximity. Many times, we look at projects around the world and we do not realize our strength when applying advances and developing projects like this one, which will be innovative in Catalonia and Spain”.

Braulio Moreno has highlighted the "joint work of different actors". “From the Giswater Association we are committed to the latest advances in the management of water and sewerage services, but despite being a group of water management companies of a certain magnitude, we know that we could not do it alone, so this agreement allows us to reach places that by being alone we could not access”.

Ernest Bladé has stated that “it is a great satisfaction that the numerical methods that we develop at CIMNE can be applied to solve real problems and, in this case, to jointly manage water considering the city and the rivers. We have made great progress by integrating into a single model aspects that were previously simulated and managed independently”.

This new integral urban drainage model, which in technical terms is known as the coupled 1D / 2D model, will allow to analyze the interaction between surface flow and the subsurface collector network, to determine the hydraulic behavior, surface conditions and the polluting effects of discharges.

The project consists of two phases. The first will run over the next twelve months.

The development, which will be carried out entirely in open-source, will combine two models, a two-dimensional surface flow model (IBER) and a one-dimensional collector flow model (SWMM). The result will allow to know the effects of the water on the surface, evolution of drafts, speeds, and concentration of pollutants in the streets and receiving environments (rivers, streams, torrents, etc.), as well as the behavior of the collectors, flow, and speed of the water inside.

This new comprehensive drainage simulation tool has great potential, since the problem of managing integrated drainage networks is global and there are no similar calculation models using open-source software. In addition, it aims to improve network management, better characterize urban hydrology, and detect and anticipate flood risks, very attractive aspects for companies and municipal or supra-municipal administrations that manage urban drainage and sewerage networks anywhere on the planet. The tool will also be very useful for consultancies specialized in analysis, design, and planning of drainage systems.

The project has been fostered thanks to the contributions of the RIVUS Foundation and some of the companies associated with the Giswater Association, including Aigües de Manresa, Aigües de Mataró, Aigües de Girona, Companyia de Aigües de Vilanova i la Geltrú, Aigües de Blanes, SABEMSA, CIVILE, ABM and BGEO.