The goal of the project is the development and validation of a methodology for the design, analysis, construction and exploitation of stepped spillways lined with wedge-shaped blocks in earth and rock-fill dams. This new type of spillway is very promising to improve dam safety in flood events, when high flows have to be evacuated and overtopping must be avoided. The wedge-shaped blocks spillways could be the most suitable solution to increase the discharge capacity in existing embankment dams in order to make them meet current criteria, more restrictive than the one used for the design of the majority of Spanish dams. This is a concern for the public bodies responsible for surveillance and administration of dams in Spain. It is also an appropriate solution to be applied in spillways for irrigation ponds which, in several occasions, despite of having no natural inflows, need very expensive infrastructures for the discharge of extraordinary flows.

The first applications of this solution dates from the early eighties, when Pravdivets (1989) carried out in Russia his pioneer works in this field, followed during the next decades by Hewlett et al. (1997) in United Kingdom and by Frizell (2005, 2006, 2007) in United States. However, there are very few spillways of this kind in the world, most of them in Russia in prototype stage. In 2007 the first dam in the world having a spillway of this type was built in Spain (it is currently in service): Barriga Dam in Burgos.

Despite the long history of this type of spillways, there is not a detailed knowledge on its hydraulic behavior, the effect of aeration, the stresses on each block, the suction effect, or the importance of the dynamic pressure on the stability of the blocks. Thus, several laboratory tests were needed during the design and construction of Barriga Dam spillway, some of them in large scale facilities. The application of numerical simulation to assess this problem, in which the pressures on the blocks are essential in order to evaluate their stability, may lead to outstanding advances in the development of this technology, and finally to its practical application. Some preliminary calculations have been done, with encouraging results, as it''s shown in figure 2. 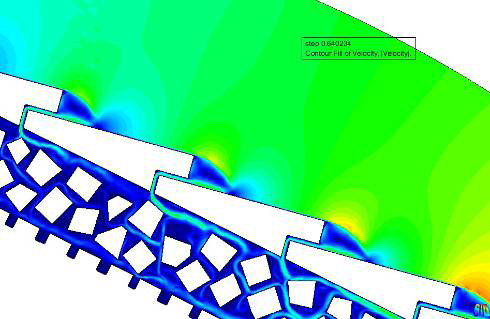 The project aims to properly characterize the hydraulic and mechanical behavior of this innovative spillway typology for its placement over the downstream shoulder of embankment dams. A detailed analysis of spillway hydraulic behavior will be made, modeling the fluid flow over the blocks using both scaled physical modeling techniques and the Particle Finite Element Method for numerical simulation. PFEM has been selected for this purpose due to its capability to take into account the effects of fluid-structure interaction. The efficiency of the new design criteria for stepped spillway with wedge-shaped blocks will be validated via numerical simulation and experimental tests.