The simulation of FSI problems is one of the main applications of the PFEM. In fact, the PFEM has a natural capability of tracking of moving interfaces and this skill is extremely useful for the simulation of a wide range of engineering and industrial problems with fluid-solid interfaces undergoing large motions.

In the early works, the solid objects were treated as rigid bodies [1, 2]. However, soon the method was extended also to elastic [3, 4, 5] and elastoplastic [7] bodies. FSI problems have been solved with the PFEM using different strategies, either monolithic or partitioned. However, in all cases, the PFEM is used to solve the fluid domain and to detect the interface, while the FEM is used for the solid solution. Practically speaking, the remeshing step affects only the fluid parts, while the solid discretization remains unchanged during the entire analysis. An extended literature review of the PFEM formulations for FSI problems can be found in [9].

Collapse of a water column against a deformable membrane [8]


Opening seal due to water pressure [6]


Filling of an elastic membrane with a viscous fluid [10]

Here below, the basic steps of PFEM for recognizing the fluid-solid interface are described with the support of Figure1. 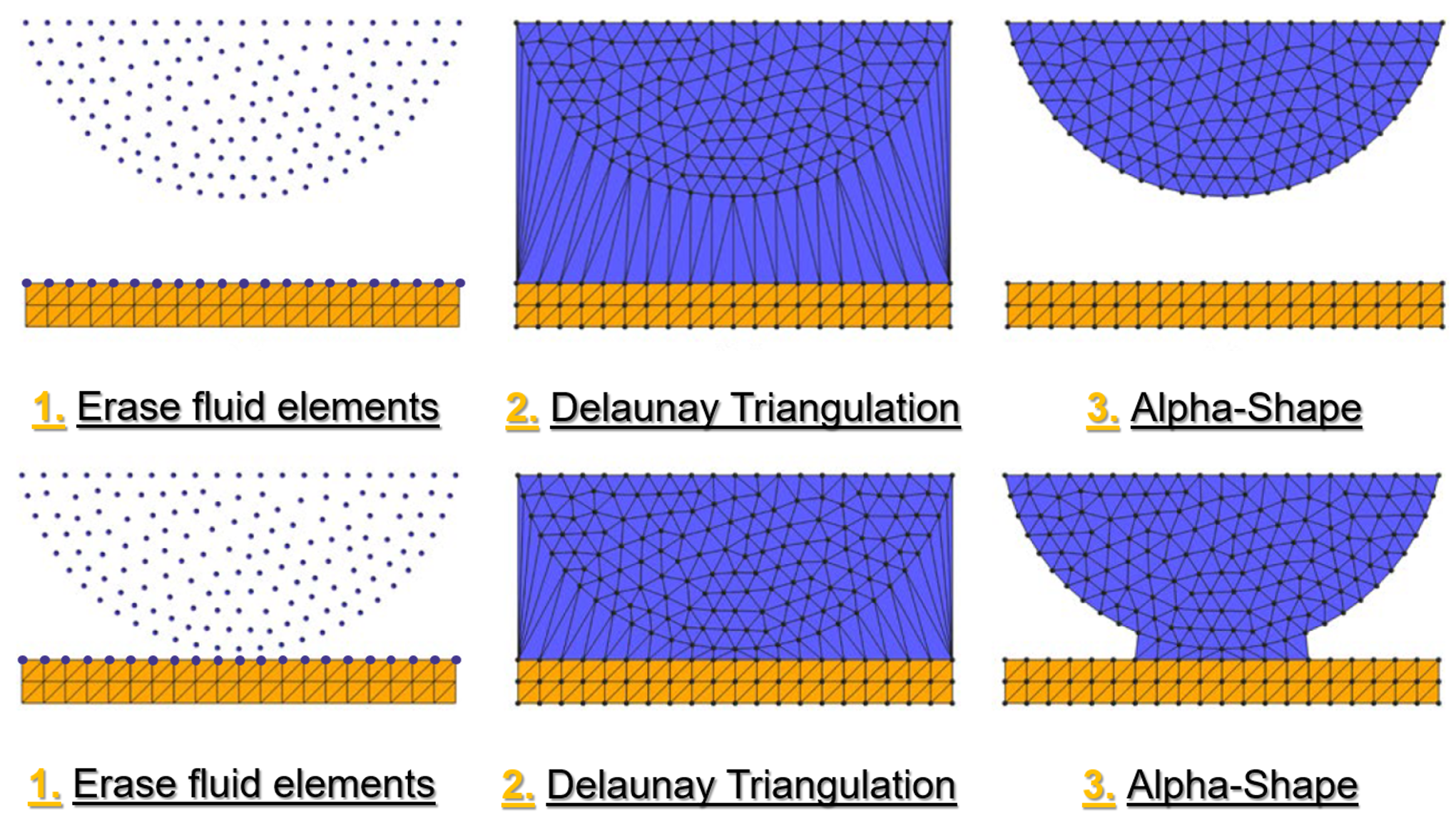 Fig. 1 Remeshing step for PFEM FSI analysis [9]. 1) Fluid as a set of particles, structure as a mesh of triangular elements with fictitious fluid particles at its boundary. 2) Delaunay triangulation of the fluid domain, including the interface nodes. 3) Application of alpha-shape method on the fluid mesh: first row, any interface element is maintained (uncoupled problem), second row, some interface elements are maintained (coupled problem).

Typically, in PFEM FSI formulations, the fluid-solid interface detection is done by superposing a set of fictitious fluid particles to the structural boundary surfaces. These particles have the fluid physical properties, but they do not contribute to the FSI solution until they are not connected to some fluid element (step 1). This set of interface particles is included in the remeshing step together with the real fluid nodes. As a consequence, the resulting Delaunay mesh will necessarily create interface elements between the fluid and the solid domain (step 2). However, after that, the Alpha-Shape check makes a selection of the interface elements (as for the rest of the elements of the Delaunay tesselation) eliminating those too large or too distorted. At this point, if all the interface elements are removed, the fluid and solid domains are not in contact and the two continuum mechanics problems are uncoupled (step 3, first row). On the contrary, if some interface elements connecting the fluid and the solid is maintained, a coupled FSI analysis is performed (step 3, second row).

Furthermore, the body-fitted mesh arising from the PFEM interface detection algorithm simplifies the transfer of boundary conditions between the different bodies, creating the good basis for an accurate solution of the FSI problem. This also allows the simulation of FSI problems involving fracturing solids. This feature is shown in the next simulation of the collapse of a concrete wall due to the impact a tsunami wave done with a recent PFEM-FEM-DEM formulation [12].

Finally, it is important to remark that the PFEM allows for a very natural coupling with all types of Lagrangian FEM formulations, independently on their solution schemes, enabling the re-utilization of existing solvers. Recently, a PFEM fluid formulation has been also coupled with the solid mechanics solvers of Abaqus software [11]. The next video shows the numerical simulation of the process of an airbag deployment.